Ss. Peter and Paul Parish is one of the most easterly parishes of the Diocese of Elphin.  It is situated on the western bank of the Shannon in Athlone.

The parish includes Athlone West, as well as adjacent areas of County Roscommon and is served by the churches of Ss. Peter and Paul, Athlone, St. Brigid’s, Drum and our lady of the Wayside Clonown.

The name of Ss. Peter and Paul can be traced to the 12th century Cluniac Abbey located on the west bank of the Shannon, called the Priory of St Peter and Paul also known as De Innocentia.

Following the dissolution of the monasteries at the time of the Reformation and the subsequent demise of the Abbey, a small chapel was built around 1795 within the limits of the ancient Priory.  In 1809 this chapel was enlarged and served as the parish church until the completion of the present church of Ss. Peter and Paul in 1937.  The former church in Chapel Street is now the Dean Crowe Theatre, named in memory of the parish priest who was responsible for the building of the new Ss. Peter and Paul.

St. Brigid’s church in Drum is located on the ancient religious site dating back to Celtic times and was on the route from Connaught to the Celtic monastery at Clonmacnoise.

In the early 19th century there was a church in Clonown, possibly built on the site of an earlier church.  The present church of Our Lady of the wayside was opened in 1965.

The expansion of the western side of Athlone in recent times has led to a large increase in the population of the parish, with the greatest concentration in the Monksland area of County Roscommon. 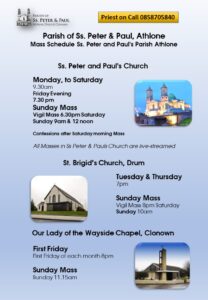 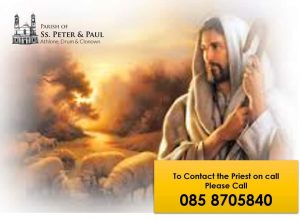